It is a millenary tradition to contemplate the stars in search of answers. That great emptiness – or non emptiness – that is, the universe leads us to speculate the reason for our existence, which was probably brought by chance, and it is that speculation that causes fear, a terror of the unknown, something that could arouse both curiosity and creativity of our migratory ancestors. Already sedentary, they began, perhaps, to measure time by applying the stars as a tool, separating the day from the night, taking them to measure seasons, for the sowing or collection of harvest. Because of this, the sky was turned into a great clock, a natural machine. And while our ancestors understood that the sky gave them a certain guarantee of their survival, they instinctively associated the cosmos with an extraterrestrial space, one worthy of a god. This is where the role of the artists, who served as shamans, such as the author of the well-known Maya calendar in disk form. In the exhibition, Universe in Expansion, Raúl Esterás (1983, Caguas), fascinated with the universe and its microcosms, his main theme, seeks answers, just as our ancestors sought meaning in the stars. His pieces are the result of his research into the “reason of our genes and the human role in the universe …”, trying to prove that there are more than white dots and darkness in the sky.

Esterás, works two types of constructions: sculpture and assemblages. They are divided between two forms: sets of suspended structures and those that hang, like paintings, on the wall. His works share a constant complementary contradiction, some merely for its velvety texture, which confronts sculptures of raw cuts like scars. Equally, it occurs in its selection of supports and materials. They are “wood and building materials” as described by the artist. He works by intuition keeping in connection with its knots and veins taking advantage of the imperfections of the material. The effect of strange depth, can be compared to the firmament, with a silky visual touch, juxtaposing with those that arise from destruction: burning, scraping, chopping, subtracting and sometimes adding color. In the mentioned woods that are polished and dyed it obtains the appearance of a noble mahogany. These figures together seem to have the ability to move mechanically and their complex simplicity hides an enigma of symbols, with both a mysterious and familiar air.

The forms alternate between squares and circles, geometrical elements considered basic, to which Raul gives them complexity. These are used as devices that compose and decompose mechanical gears to the point of achieving its operation. Such dynamism questions its function and its existence. How does something so complex move? The same question can be applied to describe the universe. Even the very title of the exhibition Universe in Expansion, alludes to the Big Bang Theory and the idea that the universe continues to evolve. His works deal with his universe, as an intimate look. Raúl admits that the process of observation and study of space has generated more questions than answers, perhaps the solutions are found in the works he conceives. 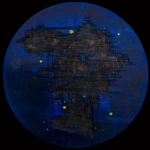 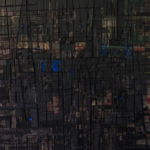 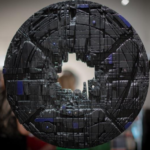 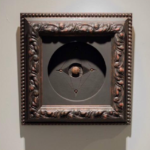 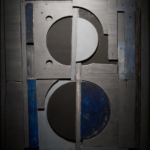